“I Know My Man Rashan Will Be Bloggin’ This…”

Posted on February 2, 2011 by rashananthony

I have a few different reasons for posting this video right about now.  One.  It is, in and of itself, awesome.  And who doesn’t like awesome stuff?  I know that we (me) here at Rashan’s World, think that awesome stuff makes the world go round.  Second.  This is my boy, Patrick Hoffman, who when he gets his act together is about to blow and go global.  He’s the best rapper you’ve never heard before.  OR if you frequent Rashan’s World, you should have heard his material by now!  And thirdly, I’m dropping this right now in preparation for RANDY BOI PARTY 2011.  For now, keep that on the QT, as we’re technically not allowed to start advertising quite yet, but let’s get the party started here on Rashan’s World!  February 12 will be the day you’ve been waiting for, and the biggest bash that my tiny liberal arts college has ever seen!  This thing has literally been about three years in the making.  So come out if you have the chance.  Better yet…rearrange your schedule so that you make it down.  More details will be coming soon as we ramp up the hype for the event.  But in the mean-time, peep this sick video which (by the way) is a little sneak peak at an EXCLUSIVE track to be dropped by Patrick AT Randy Boi Party….BOOM.  Enjoy. 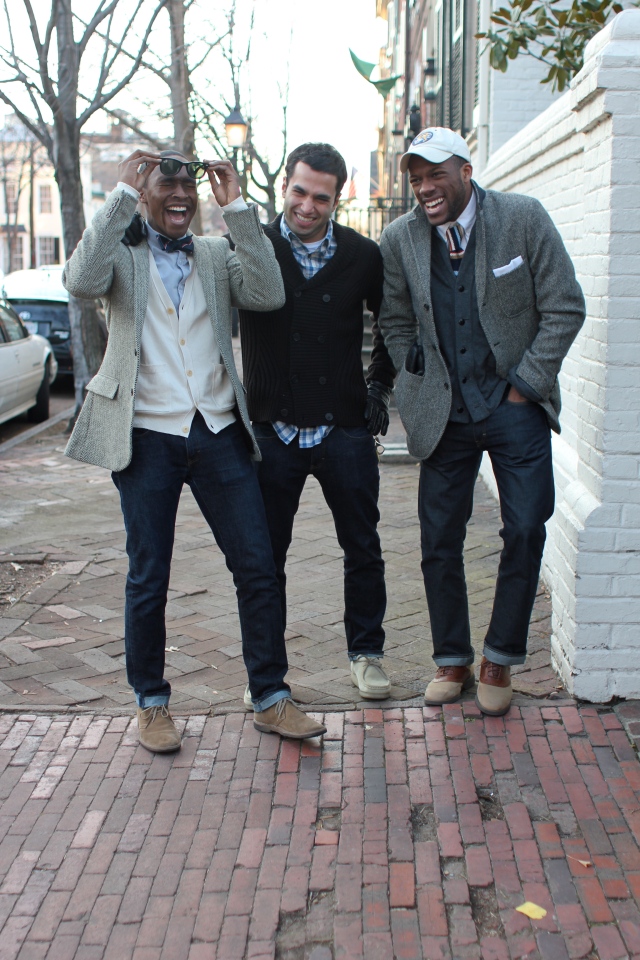 Where have I been for this RW hiatus?  I been hustlin.  Naw…but seriously though, I’ve been working on a whole new projecte with a couple of my long time cohorts that’s taken a lot of time and effort on the internetting front.  As well as time out in the field, making things happen.  And in Panera where some of our brainstorming/time-wasting and business decisions went down.  Perpetual Style started out as another good ol’ Tumblr project.  I like posting pictures of fashion and style, and whatnot, so I decided that this was worthy of it’s own Tumblog.  I enlisted the help of my two oh so stylish partners, Will and Habib, to make this thing the best that it could be.  And we’ve done well.  We’re still keeping that going at www.perpetualstyle.tumblr.com.  But after doing that for a while, we decided that we wanted to open up and expand our project a bit.  So we’ve created PerpetualStyle.COM.  A bigger blog where we have a lot more going on.  Some writing, our personal ideas on style, and a bunch of really nice pictures of the three of us, trying to look fly.  I don’t want to say too much, as I really want you all to check out the site for yourself!  Click on the link in the text or on the picture above of the Perpetual Style Crew to jump to the site.  Below I’ve placed a pretty insanely well done video, shot and edited by my man Habib for PS.  Check it out.  You’re sure to enjoy!

I know I’m late…but BOOM there it is.  2010 is gone, 2011 is here.  We’re one twenty-fourth of the way in.  We’ve barely began, but now the year is almost over.  On to the next one.  Well, okay.  Let’s not get ahead of ourselves.  We still have a lot of living left to do this year!  And for now…I’m back at school.  My last semester of under-graduate education…barring some sort of unforeseen disaster (but let’s not even go down that road.)  So I’ll finish school, and then I do not even know what is next.  Beijing?  Tokyo?  Alexandria?   New York?  San Francisco? PARIS?  The possibilities are endless, and the sky is the limit as far as I’m concerned.  I believe, and will openly share with anyone…that if you can conceive it, and if you can build a plan (you don’t have to!)…then anything is possible.  My next step?  Idea conception.  Nearly everyday I am inspired to move in a new direction.  My imagination is my main inhibitor.  I’ll take that.  Better than feeling resigned to a particular path like so many people in this world.  And what have I learned in 2010?  A LOT!  I think…  I’ve seen people come and go.  I’ve seen people come back.  I’ve reconnected, and lost connection.  I’ve discovered the meaning of Perpetual, and I’ve dared to Dream. I’ve been away for a while, but I’m back.  Man…I’ve never really left.  I hope you’re all thoroughly confused, and delightfully intrigued.  This is neither your world nor my world.  But THIS is RASHAN’S WORLD.  Welcome back.

Posted on December 30, 2010 by rashananthony

I am the single biggest fan of future rap superstar, Patrick Hoffman.  If you don’t know by now, it’s time to find out.  Here’s a few of his tracks to soothe your musical ailings.  There is more in the works.  So stay tuned.  All of this material is about two years old, but still pure gold.

A Day At The Movies: Black Swan

Posted on December 24, 2010 by rashananthony I don’t know why it’s taken me so long to write this post…I guess I just had to let myself completely digest the movie magic which was bestowed upon me by the genius who is Darren Aronofsky.  Aronofsky is the same film maker who brought us Pi, Requium for A Dream, and The Wrestler. And in Black Swan, I believe he’s delivered his best product yet, and definitely one of the best movies of the year.  And not only could I realize that this was a spectacular picture…but I loved it!  I believe that I like it JUST as much as that beautiful film, Inception, which I saw in theaters a whopping FIVE times.  Yes.  I liked it that much.  I’ve been going around telling everyone I know that this movie is amazing.  Maybe its not for everyone, and your typical, pedestrian movie goer might feel a bit overwhelmed, but I think that just about everyone should give Black Swan a shot.  Yes, it was kind of freaky, yes, it was pretty, weird, yes, it does get a little big confusing, but it’s spectacular.  And if nothing else…the whole movie is worth the minute or so of Natalie Portman as The black swan on screen.  When you see the movie, you will know what I’m talking about…captivating.  And Natalie Portman just did a spectacular job on this film in general.  She looked the part of a ballerina, which is no small feat, and her acting as a whole, showing many different sides of the character, Nina, was brilliant.  I could go on and on, but I just don’t really know what to say!  SEE THIS MOVIE.  Enjoy.

Posted on December 16, 2010 by rashananthony

Posted on December 16, 2010 by rashananthony 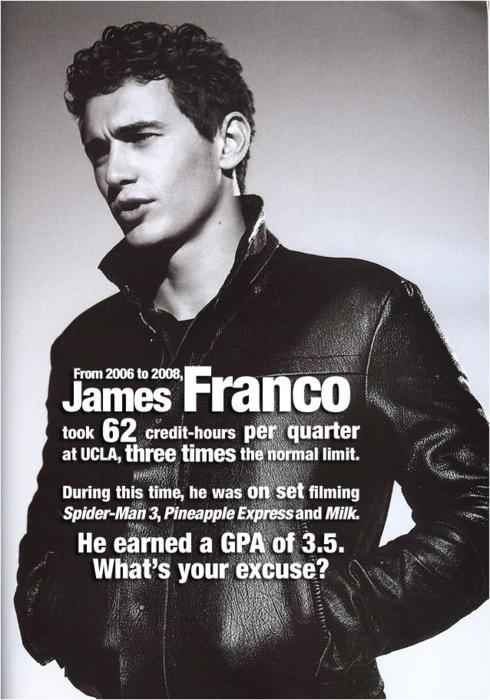 I’m not really one to talk much about the whole “man-crush” idea…but if I were to have one…it would be on this guy.  James Franco.  Honestly, he’s just a G, and I don’t use that term very often.  He’s been in a bunch of solid movies, and I’m not even going to get into that.  The thing that I think is most impressive to me is that he’s also an academic student.  And has been for a while, accumulating numerous degrees whilst still making movies as an actor and director.  He also recently wrote his own book, and has his own art show of mixed media pieces and installations.  I have to say, that I personally am not the biggest fan of his artwork (everyone’s a critic)…but I do know from first-hand experience that crafting your own show is no joke, and the breadth of his work is at the very least commendable.  And let me retouch on the whole school thing…while I have done a bit of research, I haven’t really been able to exactly nail down what he’s accomplished.  But from all reports its something extraordinary, and beyond that of any mere mortal student.  Probably the most impressive stats I’ve heard are printed up there in the image on top of this text…AMAZING.  And above all, he just seems like a cool, legitimate dude, with a nice smile of course!  Haha, oh James!  Check out the video interview below of James being interviewed by his younger brother, Dave Franco.  They are nice guys, and it gives some great insight to their character and bond as family.  And, okay.  I’m not going to say that I’m like James Franco, or anything, but I do identify strongly with him on one of the things they talk about in the interview…in Part 2, his brother says that James never likes to go to bed, because that’s “like admitting failure.”  That is EXACTLY how I feel about it.  If you’ve been around me, then you know that I will usually do anything not to actually get in the bed, no matter how early I have to get up.  Anywho, watch the video, and watch all five parts.  Its not too long, and you’ll likely enjoy every minute of it!   And the image below is of his short story collection “Palo Alto Stories.”  Maybe I’ll ask for it for Christmas…Enjoy.