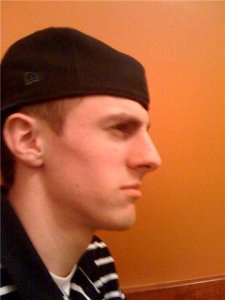 So, recently my friend and fellow UN member, (if ya know, then ya know) decided to bite my steez and create a blog of his own! It’s all good though. I encourage his action, and its really a pretty unique and interesting creation. His name is Patrick Hoffman, and his blog is called ‘Hoffman’s Head.’ And its just that, all of the crazy stuff oozing out of his head on a daily basis. So far he’s made a ton of posts, and hopefully he’ll keep going at a high rate, keeping us up to date on comedy, sports, hip-hop, movies, and everything else. By the way, Hoffman is a normal college student by day, but a rapper by night! Stay tuned, and maybe I’ll hit you with some of his tracks in the near future….

Click on the picture of his big ol head to link to his blog!! Hoffman’s Head!!!!!

1 Response to The Wild and Wonderful Web: Hoffman’s Head!